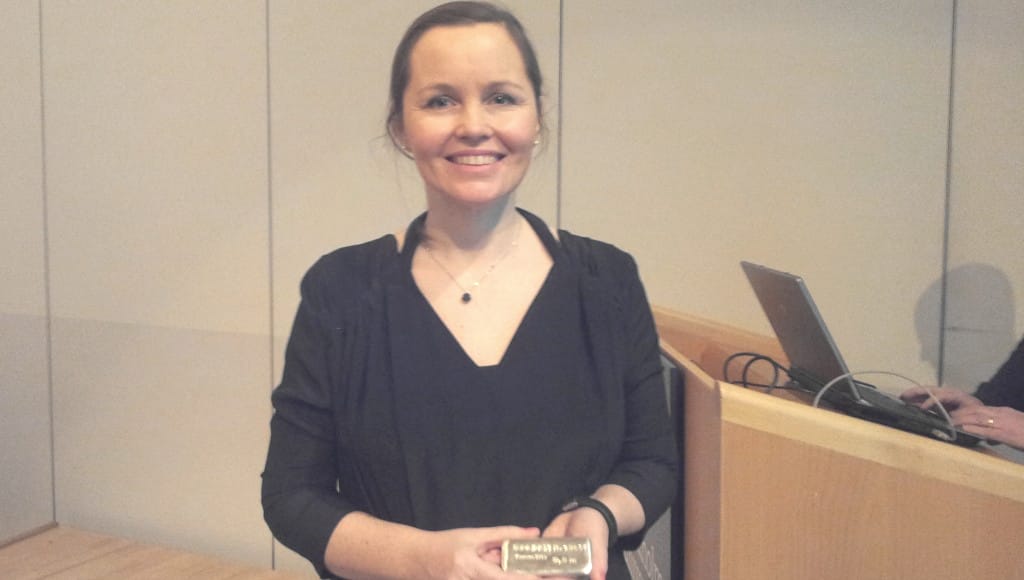 Today we are extra proud and honoured! Fredrika Gullfot, founder and CEO of Simris Alg, received the Chemical Engineering Award for 2014, which is granted annually to an outstanding chemical engineer by Sweden’s National Association of Chemical Engineers (Svenska Kemiingenjörers Riksförening). The award which came in the form of a silver bullion bar, was handed out during Berzeliusdagarna at the great auditorium of Stockholm University. Among other participants of the event, were Swedish ESA astronaut Christer Fuglesang and Nobel prize winner Dan Schechtman.

The motivation of the jury read: ”Fredrika Gullfot received the 2014 award for her work in building a production of both fuels as well as dietary supplements based on industrial algae cultivation, a thrilling example of biorefinery. She has demonstrated what knowledge and enthusiasm can achieve, and stands as a fine role model, not the least for young people choosing a career. To be utilising nature´s own processes, in a controlled manner, and producing healthy and useful products with the help of carbon dioxide and sunlight, gives us a taste of the future.”

”This is an incredible award and an amazing acknowledgment of what we do at Simris Alg”, says Fredrika. ”This is really about making use of our scientific knowledge to bring about concrete change. It is exactly this type of green solutions that are going to contribute to a better society.”

Welcome to the online journal of Simris where we regularly publish new things that happens in our fantastic world.